Sliders-5 was a landmark workshop with activation of the Stardust Flows & Stardust Wave and the beginning of the Mirror in the Sky, the Meeting and Greeting of the Plasma (Silver Seed) Ships and the long awaited information on Possession, Salvage and Krystic Extraction. Activation of the Stardust Elemental Flows marks the beginning of Team Aquafereion-Indigo’s final clearing before engaging the 82% light quotient (required for Slide) that as a collective, we’ve worked so hard to achieve. This workshop revealed the full mechanics (including detailed diagrams in the handout) of how our phase-locked Ah-VA’-yas body has literally locked our atomic Light Body into an unnatural alignment (“D-1 Etheric Ah-yas Mutation & D1 Derma-NET ManE harness”) that prevents us from sending and receiving the Eternal Life frequencies to and from our Spirit Body via our Eiron Point.

There was important information on the widespread Ah-LU-Sa-Ta-NE force on the planet, the 5 Stages of Possession, the 4 Stages of Salvage and the 6 Phases of Extraction. The Extractions involve reopening our Secondary Neuro-circuitry, allowing the extraction process to be very much easier, faster and safer (occurs in the Ah-VA’-yas Body instead of the physical body). In the future, there may be a simple host link technique to assist in widespread extractions that will involve the Stardust Fields.

This workshop gave us the starkest glimpse thus far into the Cosmic Drama and the 2012 showdown, through discussion of the activation of the White-Red Dragon affiliated Alpha Omega Temples, the Super Weapon and the possibility of a Silver Seed evacuation by 2017. This workshop introduced for the first time the First Fall White Dragons — who refer to themselves as the Exterminators, but who in fact bring the gift of the KaLE RA-ma Step-Back Path to the Al-ben’-yahn hosters. Other topics include: the Aah-JhA’, Jha-DA’, Ah-VE’-yas, Ah-VA’-yas & Ah-yas Bodies; the Telluric doorway and Eiron point; the vertical Ah-VA’-yas Doorway; the horizontal Ah-VE’-yas Doorway; the shift of the Core Atumus; the Ah-yas capsule; the six-layered Orbs; the Bio-emotive Body; and the Plasma Ships (68 miles wide) and Silver Seed Load-Out.

The first series of techniques included: (1) Engaging Your Ah-VA’-yas Thermo-Oscillatory Body, Journey to Ah-Rish’-ma-Ta’-A on Median Earth and the Lone Harmonic Pass Key; (2) Seeding the Future: Creating Your Mashaya-Hana Identity — whereby we receive an “upgrade” to our “cosmic passports”!; (3) The Stardust Flow: Initiation of the Mashaya-Hanic Elemental Orb Circulation; (4) The “Meet and Greet” silent meditation to welcome the 15 Plasma Ships (preceded by the Sacred Sentence). The second series of techniques included: (1) Landing your Mashaya-Hana: Creating the Atomic Mirror, Releasing the Ah-VA’-yas Phase-lock & Expedited Retrieval; (2) Stardust Breathing: Opening the Secondary Neuro-circuitry & Expedited Reclamation; (3) The Wings of Angels: First Phasing of the Ah-yas & Expedited Extraction.

The information and techniques presented in this workshop initiate our preparations for the Silver Seed Awakening that will occur in 2012.

Please note: It is known that there are a few places where sound quality issues arose due to venue challenges beyond our control. These issues have been cleaned as much as possible without causing distortion to the Speakers voices. Any sound quality issues do not interfere with hearing the content presented. 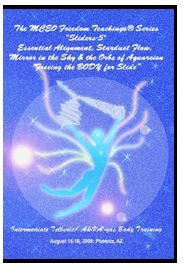