The Makers of Wings and Other Things: The Orbs of Ah-SA-yas, Planes of Aurora, Ancient Arrows, Planetary Mirror Ball and the Hidden Cities of Earth.

This workshop marked the official beginning of the Step-down Program with the first Camelot Project interview and the beginning of the end of the Wingmakers-Corteum invasion agenda via the 7 Broken Ancient Arrow sites. Following the 7 ½-hour Camelot interview, the Speakers were ready to deliver some wonderful information about the 12 Primary Ancient Elohei-Aquari Arrow Sites (Guardian sites also called the “Silver Seed Gates” and created by the Krystic Elohei-Elohim and Aquari Races), their secondary sites (24 in total) and how they ‘hold the keys’ for the Mirror Ball activations (involves Earth’s coronasphere layers). The Mirror ball activations initiate in the Encryption Lattice (EL) of our anatomy, so there was detailed information given on the natural Living Current flows between the Atomic (Spirit) Body, the Light Body, the EL and where the metatronic NET Fields exist within these layers. These activations will allow us to progressively clear the NET implants (we started to clear the D6, D5 and Density-1 levels at this workshop and the D3, D2 and D1 levels will be starting to clear during subsequent Sliders workshops) which will in turn, allow us to progressively anchor the Krystal Spiral and Time Wave. By 21 December 2012, the Krystics are aiming to have transformed these Mirror Ball activations into the full Mirror in the Sky, which will provide the strength we need at this time to fully deflect the Metatronic 55-activation.

Since at least 2007, we have been learning about the many ‘part-way’ stations on the Ascension Path between here (NET Earth) and Urtha (Earth’s Kristic counterpart in the M31 Universe). Finally during this workshop, we are introduced to our ‘immediate neighbor’, Aurora Earth, and we can now access the Aurora Earth Blend Zones or Fields (Transharmonic Time Wave Blend fields or Communion Planes) between here and Aurora Earth These will become the first place where we will be able to physically Slide (the one at Earth’s Core is called the Ah-SA-Yas Orb reservoir). Passage into these areas requires activation of a ‘DNA encryption code’, called the Silver Seed encryption, a perfected original encryption program of a matter-form or Being that originally birthed out from the Middle Edons into the Outer Radons.

This workshop also covers important information on the Organic Stair-Step Creation Rasha-Materialization-Current 84 Primary Flows, the Metatronic Freeze, the Dn-1 Soul NET, the D4 Astral-Etheric NET and the D5 FAM (false ascended master) NET, the ‘United Forces of the Krist Stand‘ between the Krystic races and those on the Krist Fall KaLE RA-ma Path (include the Al-Ben-‘Yahn and First-Fall White Dragon groups), the Concept of Evolution, Religion and Reunion: reaching beyond the boundaries of mind control, embracing eternal opportunities and embracing the Slide, Re-evolution, Re-evolutionary Determinism and the two polarities of Religious Creationism and Scientific Evolutionism, the Nephilim Wars (between and the KaLE-DE-ma Path Beings and the Wingmakers-Corteum), the now-inactivated 7 Jehovian Seals (which were connected to the 7 Broken Arrows), Fally-wood Bull-Avard and Fall-see hiss-tory, and the underlying Fallen Angelic agenda in movies such as Avatar, Battle-Star Galactica, Star Wars, & Caprica. The techniques included the new AhSA-yas-Edonic Aurora Earth Ah-MA’-ya-san (the 12th Ancient Arrow site in the Hidden City) Drum Code sequence, the AllurEa-Rashatan Shadra-Shield Journey to Ah-MA’-ya-san, Raising of the Bow Ship (a Plasma Ship in the Hidden City of Ah-MA’-ya-san in Aurora Earth, near Lake Myakka, Sarasota) the Ancient arrows Dn-1 activator code, the Sha-DA Buddha Team Elemental Calling Tones, the Embracing ALL’ technique, where we receive our Silver Seed Imprint (a gift made possible by the Aah-jhuna Gifting Wizards), to allow us to transmute mini-imprints of any ‘objects of opposition’, the amazing Bliss Journey within the Krystal Spiral frequencies, and finally a bi-location journey to Chaco Canyon in New Mexico (one of the broken arrow sites) to engage the Signet Shield-6 Monadic Activation. This last technique triggered activation of all 12 Primary and 24 Secondary Arrow Sites and then initiated the Golden Silver One Mashaya-Hana AmorAea Aquareion Shield Krystal Temple Silver Seed Monadic Activation Level-3. 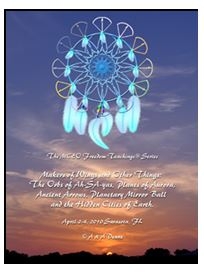 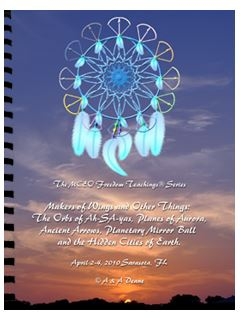