Dawn of the Age of Enlightenment: The Dance of ARHAYAS, RAI Talisman Codes, Krystal Spire of Al-Hum-Bhra & Aurora Ascension Earth-Stand7

Reclamation of the grids, Gate-opening game-changer, Adashi-3 Ascension! Come celebrate a new dawn of the age of enlightenment; an AL-Hum-Bhra Earth sunrise and Aurora Earth birth.

This workshop is a significant moment in our CosMYah's history, an AL-Hum-Bhra and Krystics' Victory. The Gates have been opened, the Fail-Safe has anchored - Aurora Earth is HERE and NOW! Our new Aurora Earth has received an Ascension extension and become an Interdimensional Ascension station; a core logistic for Krystics wanting to make it home.

Net-Earth has blended with its Tan-Tri-Ajha twin! The barriers between Net and Median Earths are coming down. The Grids have been reclaimed for good. New levels of Krystic conscious assistance have anchored, and are with us now to assist in this new Ascension station creation. Such beings include the Five Plasma-Sun Talisman™Gate Keepers Code Beings  of the AL-Hum-Bhra Magistracy Councils Tan-Tri-A’ jha Collective &  their corresponding AL-Hum-Bhra Cathedral Complexes.

Also introduced is the Eye of AL-Hum-Bhra code, representing the mathematical code of the Tan-Tri-Ajha blend field of Net-Earth andMedian Earth, together forming Aurora Ascension Earth. It is the literal Eye/Doorway through which Median Earth's frequencies anchor, assisting us to increasingly align with the Median Earth Reality Fields and higher plasma frequencies as they come in to the planet.

Learn about  “Return of the Golden-Silver One-The Golden Spark of God-Source Love & the Silver Seed of Eternal Life”, “The Silver Seed Awakening”, the “Halls of ARhAyas & Earth’s Plasma-Phase-Generator Temples of the Planetary AL-Hum-Bhra Cathedral Network.

Further topics covered in this workshop include the “Eye of ARhAyas” Pulse-Point & the Cos-min-yahas AL-Hum-Bhrus “Span of ARhAyas” Flash-Point. The Planetary DhA-yah-fication Point, AL-Hum-Bhra Krystal Spire, the “13th Day of Kryst Mass & Dawn of the Age of Enlightenment.“

Earth has regained its Grace as an Ascension Planet  via the AMCC-MCEO Fail-Safe Krystal River Host. “Life After Earth” = “Life on Aurora Ascension Earth”, HERE and NOW, and for the generations of Aurora Earth that will span the next 900 years of our Planetary Krystal River Host to Adashi-3 Ascension! 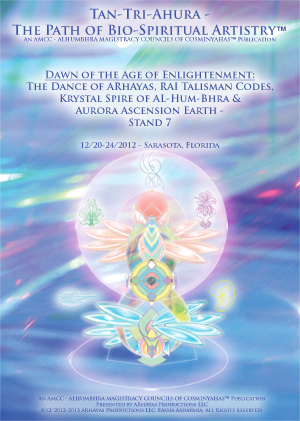